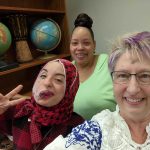 In this article, you will learn about: Lamise’s heartwarming story and reason for coming to Akron How the Akron Community helped Lamise in her medical journey What GTA did to support Lamise personally & professionally How you support GTA and Lamise’s inspiring journey Lamise’s story is a real-life example of the bridges that Global Ties Akron builds between Akron and international scholars coming to NE Ohio. In October 2021, Lamise had to leave Akron and … Read more

“We’re hoping we’ll see her back in the U.S., whether in Akron or somewhere else, for treatment.” Lamise feels the same: “I feel that maybe this is for the best. Maybe I need to go home to reset and maybe find other options and maybe we can work on the fund as well that will make it more sustainable to support more procedures.” Lamise has a job lined up with a nonprofit in Egypt that … Read more