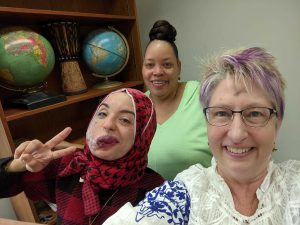 In this article, you will learn about:

Lamise’s story is a real-life example of the bridges that Global Ties Akron builds between Akron and international scholars coming to NE Ohio.

In October 2021, Lamise had to leave Akron and return to Egypt after losing her job due to structural changes and budget cuts in the company that hired her.

Michelle Wilson, executive director of Global Ties Akron, said that “When the time is right, I feel strongly that she’ll be back in the U.S., whether it be for medical procedures and or following up with another degree or it could be the right job will present itself.

Lamise returned to Akron at the beginning of 2022; after getting an offer from Global Ties, Akron to temporarily join the organization as an independent contractor, utilizing her cross-functional business background and academic degrees.  Lamise will support the team with different projects relevant to Global Threads Boutique operations and vendors as well as help with GTA programs and events.

Lamise says about this opportunity that it’s like a second chance and a win-win situation that can help her continue job hunting for a permanent opportunity.  She’s also happy that she will be able to utilize her expertise now for supporting GTA initiatives. She pays gratitude for GTA continuous support during her medical journey.

While working as an independent contractor with Global Ties Akron, Lamise is also exploring possible treatment for her congenital medical condition, which caused her facial difference.  Lamise is a smart and aspirational young lady who touched the hearts of the Akron community after publishing her story on the Akron Beacon Journal (ABJ).  Due to the overwhelming support from the community and admiration of her resilience and personality, ABJ published a series of articles that resulted in raising nearly $103,000 through generous donations from our community.  You can read about Lamise’s story and the overwhelming support that the Akron community offered her through this link: Akron Beacon Journal – Lamise’s Story

Global Ties Akron was part of TeamLamise* and even started a GoFundMe page on behalf of Lamise when she was starting her medical journey.  These funds were raised for her treatment and medical bills, and still accepting donations to support her personally and professionally.  You can also support GTA in funding Lamise’s treatment and insurance through this Link:  www.tinyurl.com/teamlamise

Global Ties Akron will continue its promise in building bridges between Akron, Ohio, and the world embracing values such as diversity, inclusion, acceptance, and respect of all differences.  If you believe in GTA’s cause and you’re interested in supporting us to strengthen academic, corporate, organizational, and personal links between Northeast Ohio and the world, please go to our Donate page.

TeamLamise* is a team of community members who wanted to support Lamise in her journey, and that team included university professors, advisors, friends, and community advocates.